A series of authentic Thanksgiving recipes from Louisiana

The dressings of south Louisiana are often called stuffings because they are made with cornbread. Stuffings and dressings can be made with chicken, oysters, or shrimp, or with ground beef or sausage. 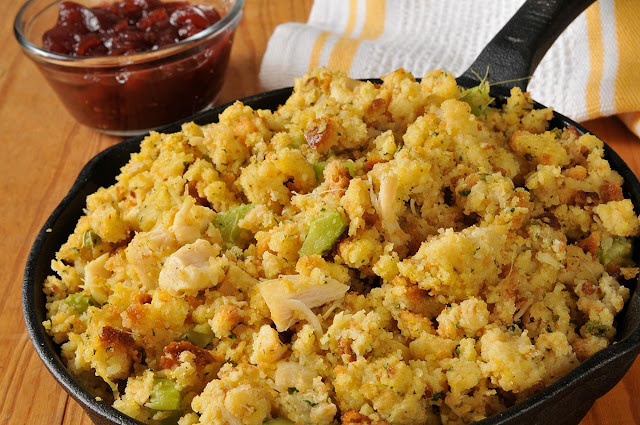 Using a knife, slice the fryer into serving pieces and coarsely chop the giblets.
Put the chicken in a heavy Dutch oven and cover with enough water to cover.
Over high heat, bring to a boil, then reduce heat to medium-low and cover.

In about an hour, simmer the chicken until it falls off the bone.
Take the pan off the heat. Retain the chicken broth after straining in a colander.
The chicken and broth should be set aside to cool.

It is safe to handle chicken once it has cooled off. Discard the skin after you have pulled the meat off the bone.
The liver and giblets of the chicken should be finely chopped. The meat from the neck needs to be removed. Mix all ingredients together in a large bowl.

In a large saucepan, heat the oil over medium heat. The onions, bell peppers, and celery should be cooked for 6 to 8 minutes, stirring occasionally, until they are tender and golden brown.  The cornbread should also be added at this point along with the parsley and about 3/4 cup of chicken broth.

Combine the hard-boiled egg, baking powder, and beaten egg in a small mixing bowl. Add the cornbread mixture to the mix and mix well. Sprinkle salt and pepper over the chicken pieces.
Gently mix. If you want it to be more moist, add more broth. Turkeys and chickens can then be stuffed with the mixture.

Before stuffing the cavity of the bird, allow the mixture to cool completely. You can also serve the mixture as a casserole if you wish.

Add the dressing to a casserole or baking dish, grease it with melted butter, and bake for 15 to 20 minutes at 350°F until hot.